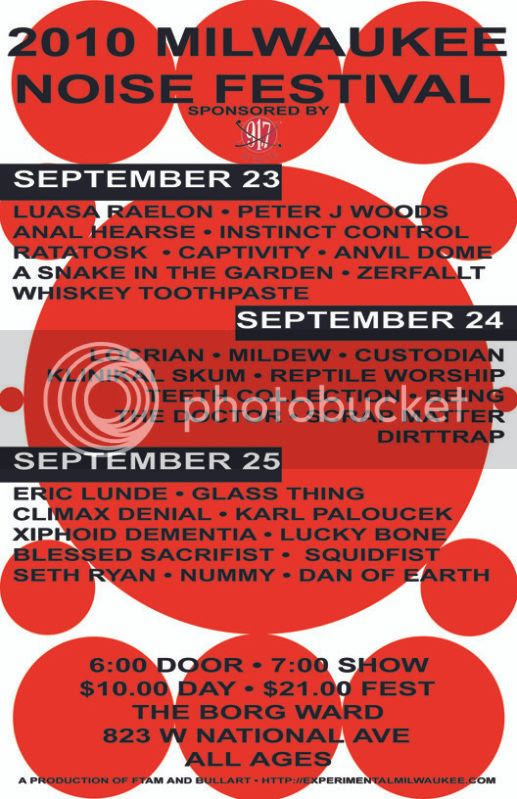 Josh Lay/Teeth Collection split/collaboration 12"LP +bonus cdr.
We are beyond pleased to present the first 12" LP on factotum tapes! This release documents the collaboration of the two taken from the jam sessions a few years ago that spawned the now out of print double cassette.The Lp is two side long haunted burners that have never been released until now,and the cdr is a repress of the oop double cassette.Packaged with black jackets with dark blue silk screened front and back and insert with info. Co-produced with HUSK Records. Limited to 200 copies. $20 U.S.A./$25 MEX./CAN./$30 WORLD
-------
paypal: matthew_reis @ hotmail. com
or you can order it from josh over at HUSK: huskrecords @ yahoo. com 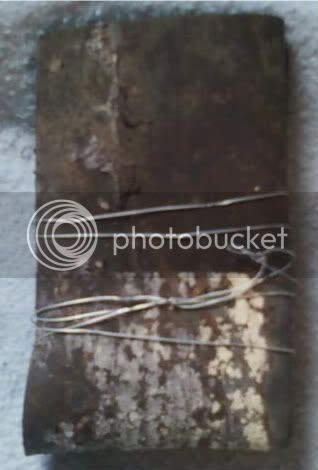 MEANING – “ OPEN POCKETS”
Sound sources include synth, voice, tapes, guitars, banjo and other stringed instruments, half a drum kit, amplified metal objects and various bits of junk. All of the above are prepared and or treated, played with a bow, e-bow, brushes, screws, forks, twine, twigs, mallets, metal rods, springs, and other such things at least half the time. Sort of musical, sort of fucked. Long running trio of the guys behind Teeth Collection, Original Tongues, and Plasmic Formations
FACT012 C60 LTD TO 50 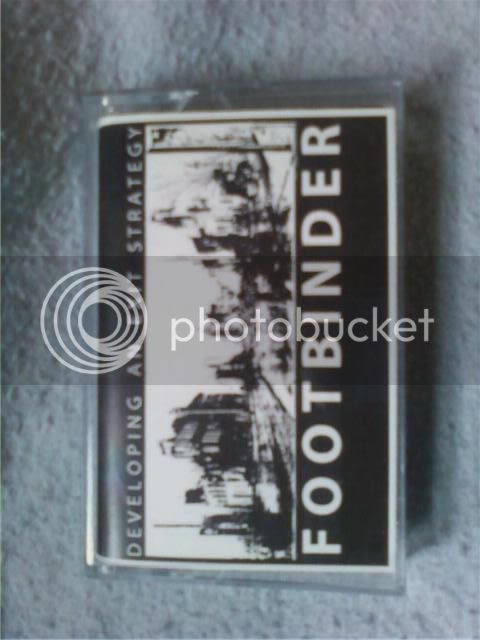 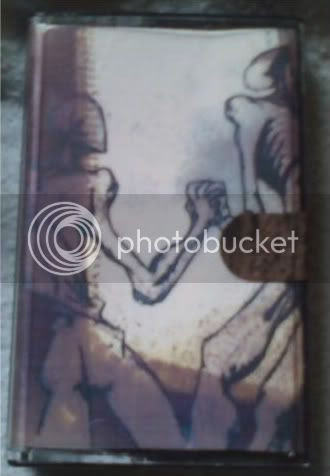 GNARLY SHEEN – “DANGER DANCERS”
Morgan might be better known as half of swamp horse, or a former member of cadaver in drag… but Gnarly Sheen is all Morgan, and it’s all fucked. It’s the audio equivalent to a crusty metal dude throwing up at the parking lot carnival cuz the acid was just too pure, all the sounds and faces melting. Most out and out bizarre thing on Factotum thus far.
FACT019 C40 LTD TO 50 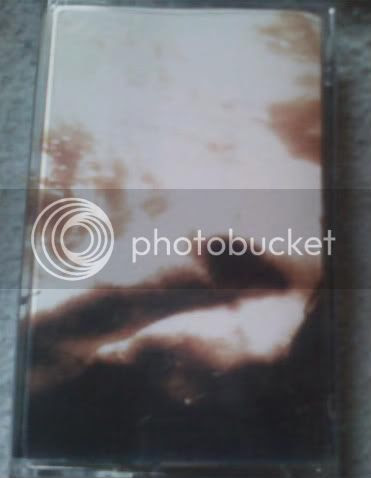 INTERSTATES (ETC.) – “AND I FELT CLOSER TO GOD…”
I met Athens, Ohio’s Brandon Greeter at the first Athens noise fest, and i was totally blown away by this tape he gave me in a trade. Brandon agreed to give me some material, and it’s one gorgeous piece of work. Slowly unfolding lush guitar sounds that slosh like a child in a digital bath.
FACT020 C30 LTD 50
ORDER INFO:
single tape $6ppd/$8ppd world
($5/$7 when ordering more than one item)
email/paypal to: matthew_reis@hotmail.com
trades welcome (tapes please, no cd-rs).
Posted by mreis at 1:32 PM No comments:


new teeth collection release on Together Tapes, ordering info below: Teeth Collection "The Together Tape" c30 / $6 ppd US / $7 Can/Mex / $11 World
Totally stoked to do this tape for longtime friend Matt Reis and his ongoingly excellent Teeth Collection. Matt has been an abuser of metal for as long as I've known him, since our days together in Yes,Collapse when he built a whole drumset out of oversized metal scrap to this current, far more restrained, scraping, clattering sounds of the clumsy workshop. Often the hiss of the room itself is the dominant sound until the throb of perpetually offended junk arrests the ear in the maelstrom whipped from Matt's frenzied destruction. Full color j-card with b/w interior and mag-scrap labels. Edition of 50.
Paypal: rizerpads@gmail.com
Email: rizerpads@gmail.com with any questions or to inquire about combined World shipping
Posted by mreis at 8:47 PM No comments:

Plasmic Formations- As the ground crumbled around me,I turned to see a light c-30.Mind flaying Psych Noise from the always impressive Ohio based Plasmic Formations.Those that caught the recent tour with Teeth Collection know what to expect,awesomeness!Your brain will become celestial tapioca.You've been warned.Full color artwork.Hand numbered edition of 50 copies.$6 ppd in the U.S.A./$8 ppd in CAN/MEX/$10 WORLD
pay pal/e-mail = huskrecords@yahoo.com
sound samples available at www.myspace.com/huskrecordings
Posted by mreis at 8:39 PM No comments:

plasmic formations live in amherst 2010
Posted by mreis at 4:23 PM No comments:

plasmic formations live in delaware 2010
Posted by mreis at 4:23 PM No comments:

teeth collection live in dayton ohio 2010
Posted by mreis at 4:20 PM No comments:

teeth collection live in dayton ohio 07
Posted by mreis at 4:20 PM No comments:

teeth collection in amherst 2010
Posted by mreis at 4:19 PM No comments:

teeth collection live in delaware 2010
Posted by mreis at 4:18 PM No comments:

teeth collection live in ohio 07
Posted by mreis at 4:17 PM No comments:

teeth collection live in ann arbor. 07
Posted by mreis at 4:16 PM No comments:

teeth collection live in ny july 09 , in two parts. part one.
Posted by mreis at 4:11 PM No comments: 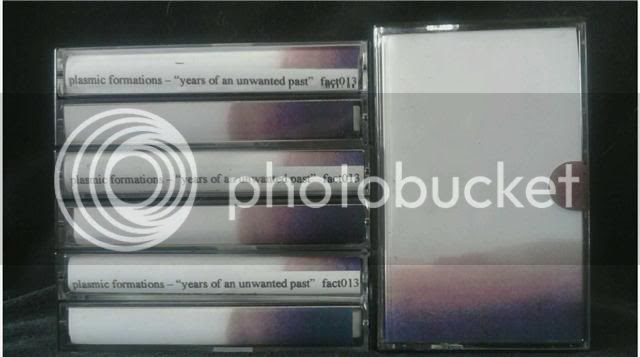 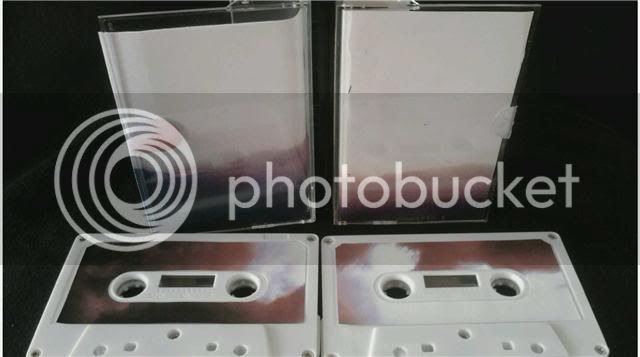 PLASMIC FORMATIONS -
“YEARS OF AN UNWANTED PAST”: This release collects the early, un-released works of Josh Fink aka Plasmic Formations, pre-dating even his work with Yes,Collapse (2004 - 06) by several years. In fact several of the tracks were recorded as far back as 1999, before Fink was able to obtain a synth. These are archived from private tapes never intended for any kind of release, recorded quickly and crudely, and the sets ups were crude and minimal, yet upon unearthing the material for this tape it was discovered that even on these early recordings Fink still held the ability to create the expansive, slowly evolving blissed out synth vibe we’ve come to expect. Even while using as little as a contact mic on a cheap bubbling water toy found at a novelty store thru a barrowed delay pedal and an old (new then) kaos pad, still has that horror film soundtrack feel, still has that halucainagenic warmth, that deep space spectral muck.
FACT013 2xC90 LTD TO 50 COPIES SOLD OUT ! 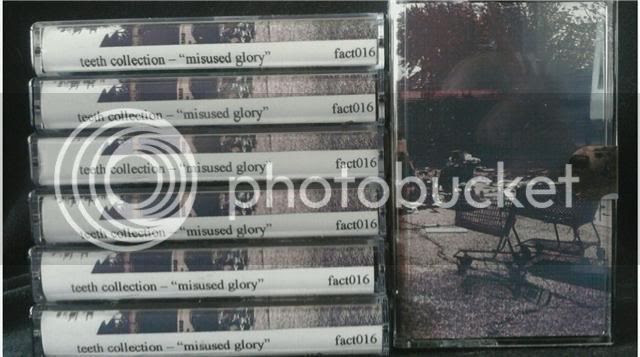 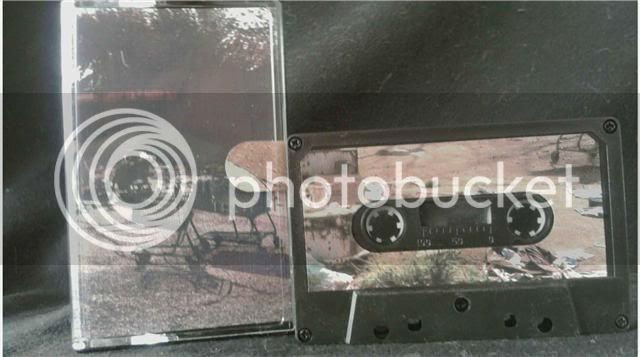 TEETH COLLECTION –
“MISUSED GLORY”
completely acoustic noise. Main sound sources are bells, banjo, the tumbler from a dryer, springs, small motors, and various other metal objects. Similar to the “Objects of Tape and Metal” sessions, but stripped even further of electronic aid by leaving out the use of tape. One mic in a large room.
FACT014 C60 LTD TO 50 COPIES SOLD OUT! 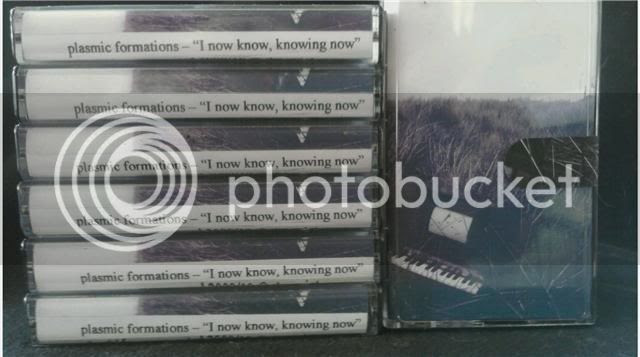 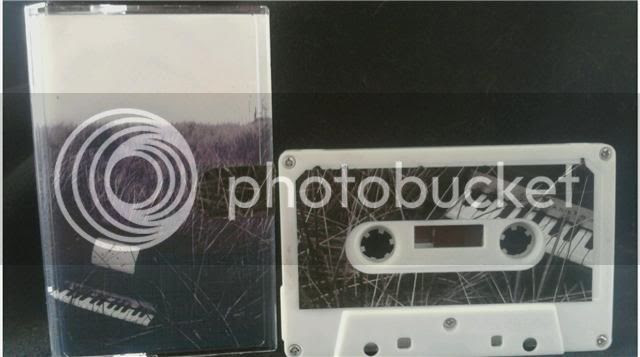 PLASMIC FORMATIONS –
“I NOW KNOW, KNOWING NOW”:
This release shows Plasmic Formations moving in the direction it has been heading since it’s inception. Mostly influenced (albeit somewhat subconsciously) by watching cult and horror film classics by the likes of Hooper, Romero, Lynch, and Jodorowsky, and a heavy does of psychedelics to fill in the gaps, the vision seems fully realized, sounding somewhat akin to early Tangerine Dream or a synth only Goblin, Plasmic build a tense atmosphere of sound using real time looping, and minimal synth lines, to create rhythmic structured pieces. If you caught Plasmic Formations live on our recent tour, you heard him perform one of these tracks.
FACT015 C90 LTD TO 50 COPIES SOLD OUT! 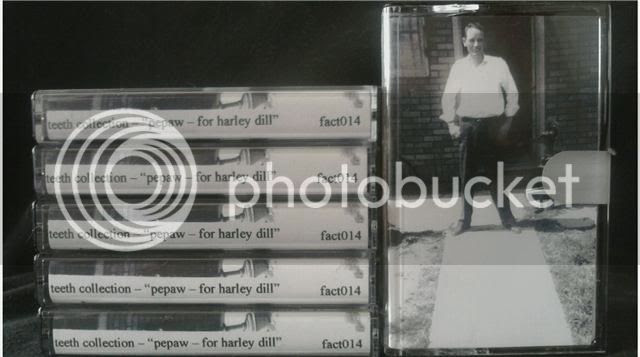 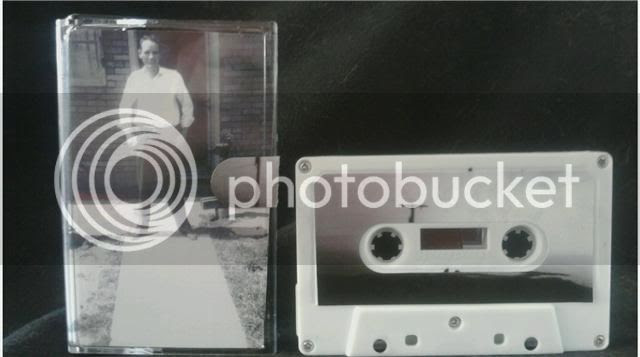 TEETH COLLECTION –
“PEPAW – FOR HARLEY DILL”:
after my last living grand parent passed away a few years ago, I was bequeathed a banjo, which I have used on these recordings as almost the only sound source in tribute to my late grand father; Harley Dill, a moon shiner from South Carolina who moved to Ohio in the 50’s for a General Motors job. These recordings are completely acoustic, quiet, improvised noise, with a great deal of personal meaning to me, with the banjo having symbolic meanings to my life and the lives of my family. I feel this is one of the most focused works I’ve ever done.
FACT016 C40 LTD TO 50 COPIES SOLD OUT! 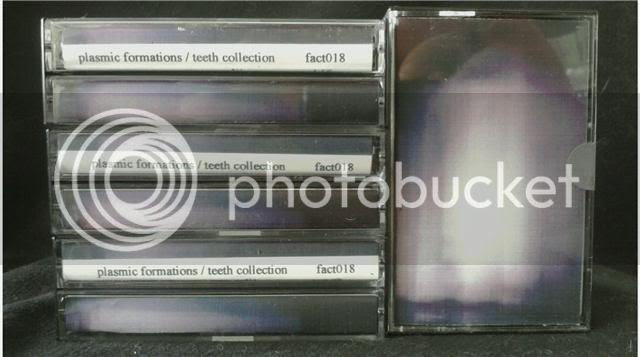 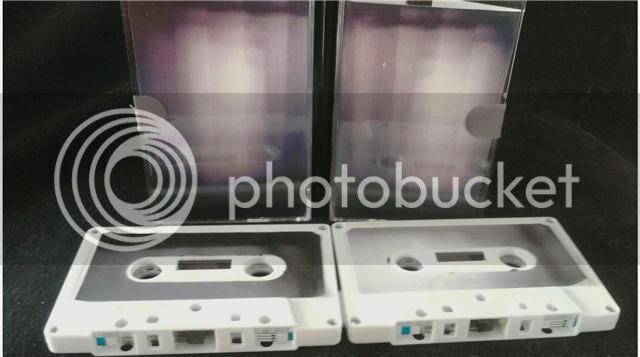 PLASMIC FORMATIONS / TEETH COLLECTION -
2010 SPACE ODYSSEY TOUR SPLIT/COLLAB:
one tape is a split, with plasmic doing his synth drone song pieces and me doing the super quiet acoustic noise set. The second tape is all collab action, same set ups, synth and acoustics recorded live @ the quiet room in Dayton. These were made specifically for our 2010 tour with Nicolas Ceparski that we just finished (april 1st - 9th).
FACT018 2xC90 LTD TO 50 COPIES SOLD OUT! 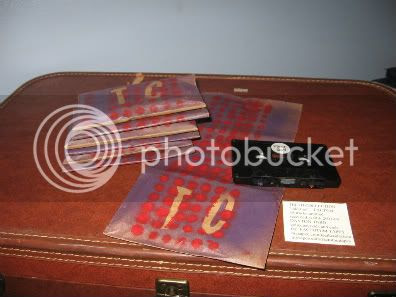 These recordings use a lot of the ideas expressed on “objects of metal and tape” and was sort of the warm up session for that release. made these for 2009 summer mini tour, edition of 25. SOLD OUT! 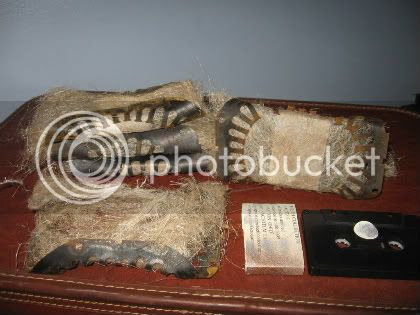 A collection of random tracks that got bumped off of other releases for time (a 20 + min epic), just never had a home (two 10min + pieces) or just didn’t fit with any other release (a totally fucked up found tape from a hotel). junk yard covers to compliment the junk yard sound. made these for 2009 summer mini tour, edition of 20. SOLD OUT! 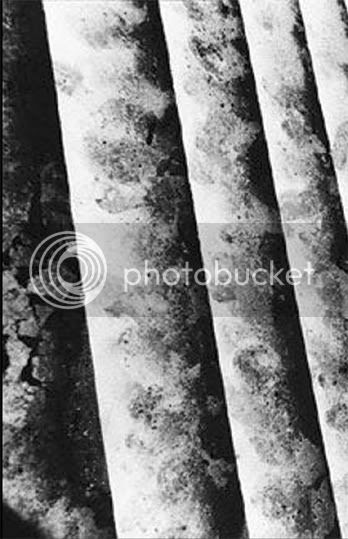 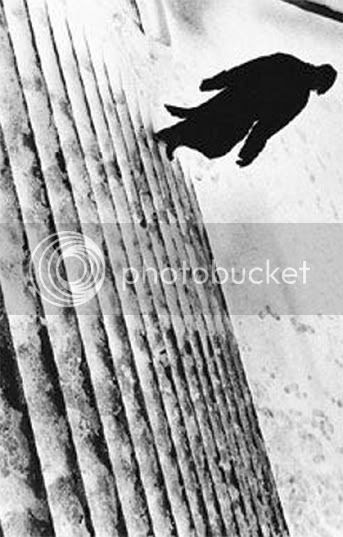 Recorded for a short east coast tour, Zeh lays down a brilliant tape composition, EID rip yr fact off with super dynamic harshness, Ceparski brings the downer vibe with a blackened doom synth piece, Teeth get all delicate with metal. Co-released by Eye Wish Arts and Community Collage. edition of 50. SOLD OUT! 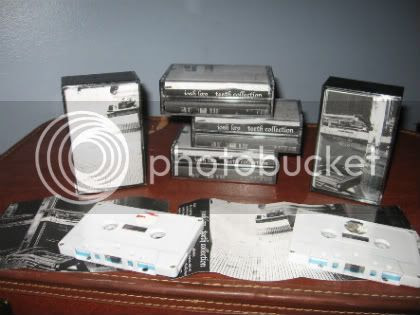 Tape one is two sidelong collabs recorded in Nicholasville KY in 08 of doom laden heavy drone, factory scrapes and ghost moans. Tape two is one solo track each. Lay’s side is like scrapping sounds from the insides of a coffin, muffled by a dark cloud of depression and hate. Teeth’s side is a study in anxiety. edition of 50. SOLD OUT! 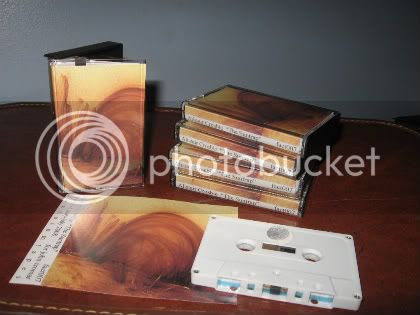 Scottish electro-acoustic composer Alistair Crosbie delivers “the suntrap”, a single track that wraps around both sides of the tape with a slowly evolving glacier like drift, the process building up and collapsing in on itself over and over. edition of 30 SOLD OUT! 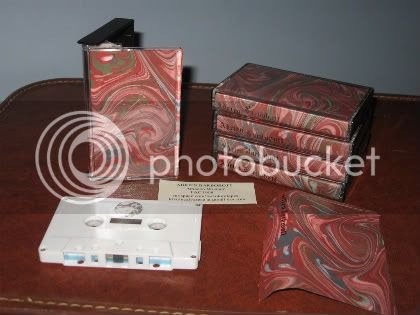 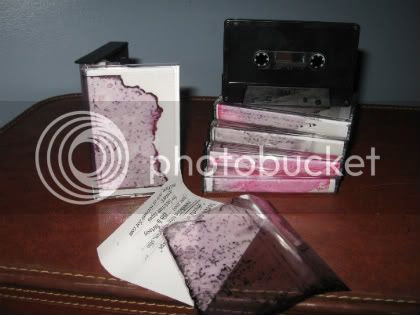 all sounds made from amplified metal objects and magnetic tape of prerecorded sounds of amplified metal objects, and a minimal amount of effects and editing were used. Mixing elements of musique-concrete, electro-acoustics, and improv techniques, all of which have been explored on past teeth collection releases, but never brought to the for front as on this release, it also sees bit of a departure from the early industrial / doom drone sound as of releases like “Putridity and Liquecense” edition of 100. SOLD OUT! 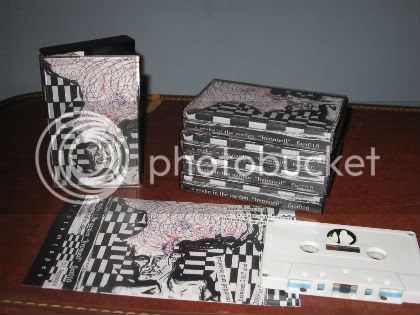 Grimeology guy Matt Mayer’s new nightmare! The crumpled, crackling organ drone at the beginning is just to lull you to sleep… then all the things that go bump in the night come out in the form of heavy electronics and feed back systems that peal the skin off yr face. Side B is the epic “Hypnocil”, a slow moving composition of glorious beauty. edition of 30
SOLD OUT! 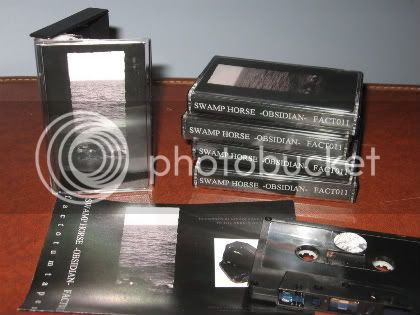 Ky duo of Josh Lay (solo/CADAVER IN DRAG) and Morgan Rankin (GNARLY SHEEN), both of HUSK records fame. In Josh’s words “by far the darkest thing we have released”, a mix of funeral doom, dark synth ambience, and creeping murky bleakness. edition of 30 SOLD OUT!
Posted by mreis at 3:29 PM No comments: